I never thought I was someone who cared about stuff. I thought flexibility was a strength of mine but I was LONGING for our stuff. We signed a lease on a two bedroom house on April 25 and “moved in”. Chris, myself and four suitcases moved in on that day. We lived in a very empty house eating dinner off of cutting boards we had begrudgingly purchased (we had SO many coming from Michigan!), using plastic silverware that had been washed a few too many times and drinking out of jars which we had eaten salsa out of.

I felt like a 20 year old version of myself living as a poor college student all the while knowing that I had masses of wonderful kitchen items, fluffy bedding, my great grandma’s furniture and plenty of clothes bouncing down some highway across America.

It was like Christmas or a never ending birthday or some celebration where you get a ridiculous amount of things. Box by box stuff came off of the truck. Box after box was loaded into our house here in Portland. As they unloaded one after the other, we tried to direct the movers where to put stuff, not really having any actual idea. 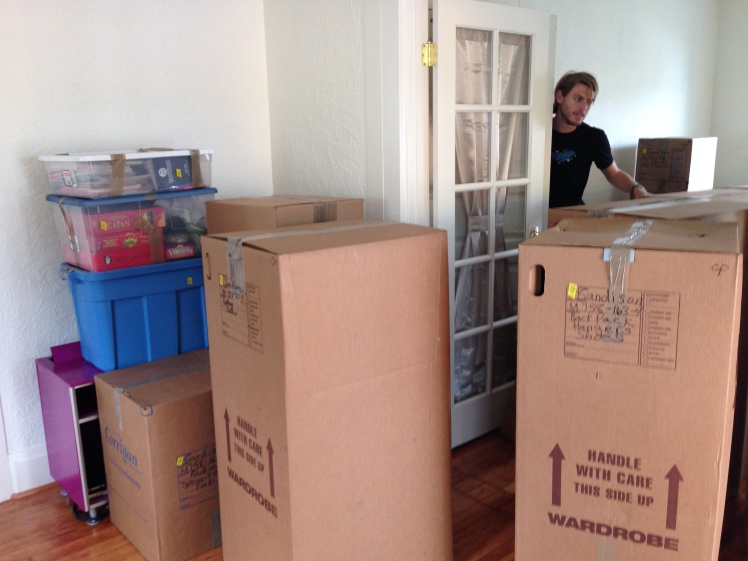 After all of our boxes were unloaded, the movers had four other stops with their massive truck to get to. We signed the papers, shut the front door and looked glassy eyed at all of the boxes. The day we had been waiting for had come, our stuff was here in our house. In Portland.

I make the point about “in Portland” because this was the odd reality that was dawning on us, the permanence of what our wandering lives had been for the past year. We had just had all of our stuff moved to Portland. This sounds obvious but it sunk in deeply that what was purchased for our house on Fairmount St.  was now trying to fit into this house on Holgate Blvd. What was given to us by people we love dearly at our wedding was now coming out of boxes nearly new and ready to be used again.

We are not on the travel nursing rotation anymore. We are not in Grand Rapids for the foreseeable future (foreseeable in my mind is approximately two years). We have just made a huge decision and the hugeness of that decision sank in with the arrival of our stuff. Every box opened and unloaded was another reminder that we have chosen to settle here for a bit. Settling doesn’t seem to be something I’m very good at lately.

Chris went to work that Friday afternoon and I unloaded boxes. This was very healthy for me, to sort and organize, to reflect and decorate. It’s now been over a week since we’ve had stuff and this house in Portland is feeling a little more like home. Our stuff is integrating into the fabric of this house and it’s reminding me that this too will be home. This place will have memories made in it, will have friends stay in it and will hold a lot of life.

One thought on “our stuff. in portland.”